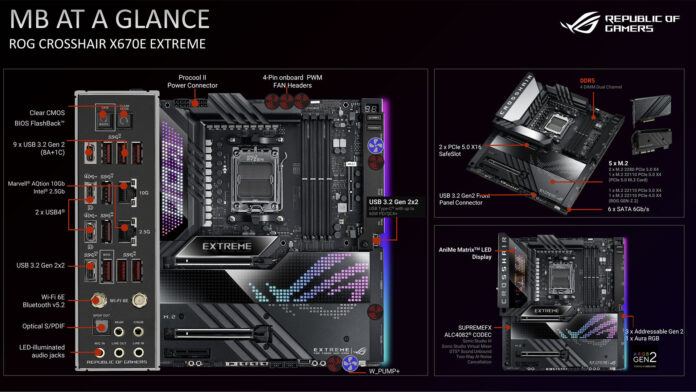 ASUS Republic of Gamers (ROG) has unveiled details of its new motherboards for AMD’s long-awaited AM5 platform.

Both at AMD’s Meet the Experts event and through its official YouTube channel, AsusRepublic of Gamers shows off its new ROG Crosshair X670E Hero and ROG Crosshair X670E Extreme flagship motherboards, featuring PCIe 5.0 connectivity to give users access to to the fastest next-gen SSDs and GPUs, DDR5 RAM with 50% faster data rates than DDR4, USB4 and USB 3.2 Gen 2 ports, support for Quick Charge 4+, and a massive subsystem that lays a solid foundation for overclocking to take next-generation AMD Ryzen CPUs to the next level, with ProCool II power connectors that offer better contact with PSU sockets, better heat dissipation, and better performance. Greater reliability compared to common hardware.

Both boards feature two other USB-C ports, in addition to seven USB-A ports. The Extreme features 10Gbps and 2,5Gbps Ethernet, while the Hero features 2,5Gbps Ethernet. Both boards have a full set of audio connectors and WiFi 6E support, as well as a CMOS clear button. and rear-mounted FlashBack BIOS. This new standard takes advantage of the 6 GHz band, a portion of the spectrum that has only recently become available in certain countries. 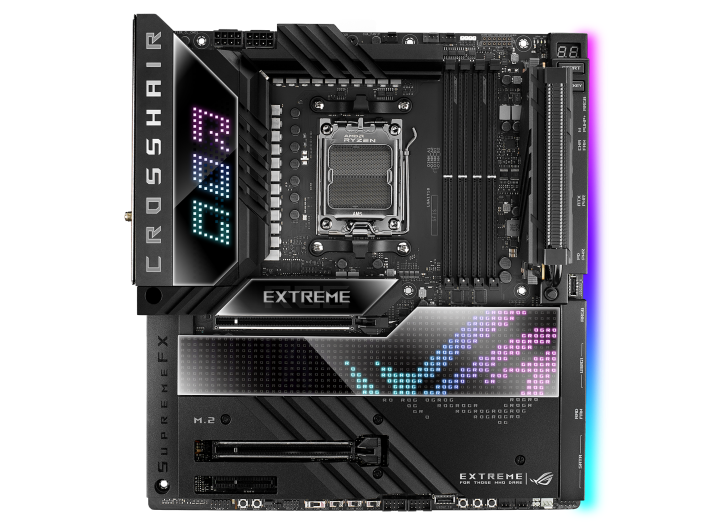 The unrivaled customization aesthetic features the AniMe Matrix display, an LED matrix that can display retro-style custom animations. A vibrant lower illumination pours out from the right edge of the plate. One Aura RGB header and two addressable Gen 2 headers allow users to connect RGB LED strips to their case and easily sync it all up with their compatible Aura Sync gear.

Both motherboards incorporate exclusive ASUS Q-Design innovations, such as the PCIe Q-Release button that allows users to release their graphics card from the slot with a single press. Single-sided Q-DIMM, for users to worry about a single latch on the most accessible side of the DIMM slot is all that is needed to hold a memory stick firmly in place. Q-Latch M.2 that gives users the peace of mind to secure or loosen an M.2 drive at the tip of their fingers without having to go back to fiddling with another tiny, easy-to-lose screw. Additionally, the ASUS Q-LED diagnostic matrix provides a quick and easy reference if the system encounters a critical error during its power-on self-test. Four LEDs on the motherboard, clearly marked for CPU, RAM, graphics card, or boot device, illuminate to tell users exactly which component has encountered an error.

In the coming weeks, ASUS will be able to continue to share more information on the high-end ROG lineup and motherboards from the other product families as well. Stay tuned for more information.

Global PC Shipments Fell 15% in the Second Quarter of 2022