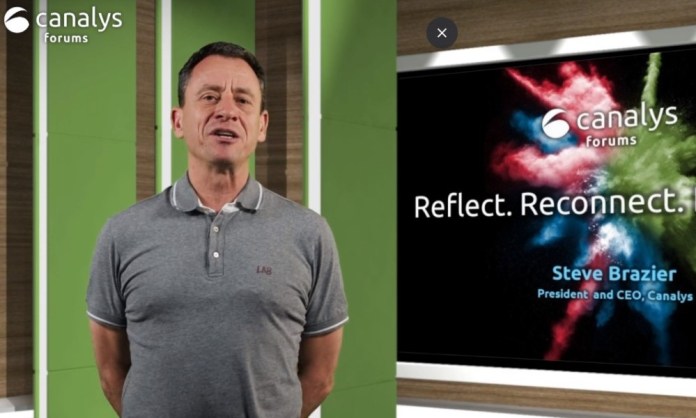 In his traditional analysis of the IT market, the CEO and President of Canalys, while acknowledging that this pandemic has left contradictory messages for the market, emphasized that the 2021 expectations for the channel are positive: “I would be very surprised if it does not grow between 5% and 10%,” he said. He talked about trends and opportunities.

Among the strategic losers, he mentioned shopping malls and stores around the world: “Throughout Latin America, they have been forced to close in many countries. People have gone to shop less and this is a trend that will remain, even when the pandemic is over, «he said. He also mentioned anything to do with office equipment: «They have entered a terminal decline,» he said. “City centers have been destroyed, people want to be in green spaces; it has been a bad year for apartments in the city center, the number of people on foot and traffic in the cities have drastically decreased,” he pointed out. In that sense, he emphasized that the good news is that the oil and coal gas industries are suffering: «The pandemic will witness the end of the carbon era for power generation,» he said. He also put theaters on that list and mentioned the end of formalwear.

Cash is another victim of the pandemic mentioned by Brazier, firstly because there is a risk of transmitting an infection through physical money, but also because the way we make payments has changed.

Regarding short-term losers, he talked about sport, both amateur and professional, the events industry, and about airlines and airports: “There will be fewer planes in the future, even if we are allowed to travel again, fewer people will do it, prices will rise, which will also be a disincentive to travel, «he analyzed.

“It has also been terrible for all the people who depend on tourism and tourist destinations, hotels, restaurants, bars, they have all suffered, but we are pretty sure that they will recover as soon as it is safe, as well as nightclubs and gyms.»

On the other side, grocery stores and superstores, home furnishings, maintenance and decoration appear as tactical winners. «The environment has been a big winner because there have been fewer planes, fewer cars, less pollution,» he celebrated. And he mentioned home fitness as another trend.

Among long-term winners, he included rural villages: “People are no longer tied to their office, they don’t want to be stuck in their apartments, so they are looking to move to smaller city centers, go back to their natal city or more rural places, where they can work if they have 4G or 5G broadband,” he assured.

Another winner is e-commerce, food delivery companies and home packages; «The automation of the technology behind these deliveries has also experienced tremendous growth,» he said.

Video transmission has taken its place, particularly dominated by US companies, so «we run the risk that we will lose some national productions as a result,» he warned.

«Of course, another big winner is video meeting and collaboration in business space,» he said. And he highlighted computing gaming: «Today’s major sporting events, outside of the World Cup or the Super Bowl in the US in 2030, will be overtaken by eSports as more and more people see them as a spectator sport,» he said.

When it comes to listing the products that have been sold out in these pandemic months, in addition to flours and spices, they are bicycles, especially electric ones, and he pointed out that some cities are looking to redesign themselves to be more friendly with this type of mobility, he explained, and also mentioned the growth of electric cars thanks to the production of cheaper low-end models, electric motorcycles and all kinds of electric mobility «Putting a battery inside something that moves is a great growth area,” he said.

«I am pleased to say that renewable energy is increasingly replacing oil and gas, most other forms of energy production is an important growth area,» he said.

He also mentioned the arrival of electronic money: “I am pleased to say that this trend is being led in Colombia; it’s the end of cash,» he said.

It is also an opportunity for technology

While Brazier reported that they expect an 8% drop in GNP in Latin America, he said that «we are lucky to be in the technology industry, which has decreased but by around 5% in the region.» And he added: “In March we thought this was going to be like the financial crisis in the US, but in June it became clear to us that this was different. I think some of you have done better because you are more used to instability and react quickly to crises, » he emphasized.

He also highlighted the great growth of the technology industry globally with “absolutely phenomenal” results: For the first three quarters the price of the shares of technology companies was 39%.

For Brazier, the large resellers did better than the small ones, since the latter needed to close because they sell to SMEs that have been closing, while the large ones serve large companies, which were the ones that transferred work faster to home office. “We’ve also seen a lot of government spending that generally favors the big resellers,” he noted.

“I’m delighted to tell you that this year will be the most profitable for the PC industry. Who would have thought this 10 years ago when all the articles in the newspapers were saying that PCs had died, that the smartphone was going to replace it, while now vendors like Lenovo, HP, Asus and Acer are doing exceptionally well.»

In that sense, he reported that in the third quarter of this year the Latin market grew in PCs by 14% per units, and especially highlighted Brazil, Mexico, Chile and Peru. «We think it’s going to stay strong for the next 12 months,» he said.

In the categories that won, he included video and collaboration as absolute number one, with Zoom as the biggest winner of the pandemic, but he also highlighted Microsoft Teams. He also mentioned accessories, such as webcams, keyboards and monitors; remote desktop technologies, with VMware and Citrix as leaders; public cloud, led by Azure, AWS and Google Cloud; and particularly highlighted Office 365: «It is a massive success because it is a great tool for remote workers.»

He also returned on the success of PCs and tablets, home Wi-Fi and cybersecurity: «This year will be a record for hacks, where especially ransomware will be strong,» he said. And he added the broadband; and inkjet printers, which have sold out in many countries.

“We could have done better, but we have suffered from a shortage of ink cartridges, webcams, PC accessories. There is also shortage for panels, for monitors, PCs, cars, and it will continue like this at least until summer 2021, ″ he said. Another shortage factor is the lack of air freight, which is more expensive so manufacturers put more on ships and this is slower,” he explained.

Another highlight is the move to a service model. «You probably feel like this trend is inevitable,» he said. In that sense, he said that the channel’s ability to earn money is much closer to how the local currency game plays, and I consider the devaluation of the real in Brazil as an example: “If you have a payment model in dollars, the client pays much more and this is not very popular; there is a lot of work in terms of carrying out consumption models outside the US,” he analyzed.

He also referred to the technological battle between the US and China. He stressed that the deployment of 5G could be a wave of innovation for Latam, since the US and Europe wait for Ericsson and Nokia that are slower and more expensive, then the deployment with Huawei could be a real opportunity for this region.

As for e-commerce, he said that retail trade grew from 5% at the beginning of the year to 10% at the end, doubling in just 12 months. “We think that Amazon could hurt the IT market, this has not happened as quickly as we expected, which is good news for channel partners. Amazon and Mercado Libre have a wide portfolio of products and if you do the analysis of what is the lowest margin of all that, it is the technology business, so if you are Amazon and want to make money it is not the best business to focus on, it is one of the most difficult businesses to enter. So, the efficiency we have within our industry is actually quite an effective barrier for Amazon to take,» he analyzed.

Another advantage of ecommerce according to Brazier is knowing your customer better: «In all businesses the winners will be those companies that have data, and the good thing for our industry is that data must be protected and backed up,» he said. He also mentioned redesign of offices, transformation of health services and education as new opportunities.

«The good news is that 2021 will be better in Latin America, we predict that there will be a 4% growth, so we will return to a growth economy next year, but still 5% lower than in 2019.»

“The channel has had a good pandemic, the technology industry has had a good pandemic, cut short by the supply of products that is still important. Next year we will see a regrowth, the large companies that postponed spending this year will start making those products next year, they will reopen SMEs. We believe the future will be very good: they will be very surprised if the channel does not grow between 5% and 10 % in the region in 2021,” he said. And he left one last message: «As long as you keep your skills up to date you will have a bright future.»

Retail Workshop 2022, The Most Important Retail Event in Latin America and the Caribbean Is Here