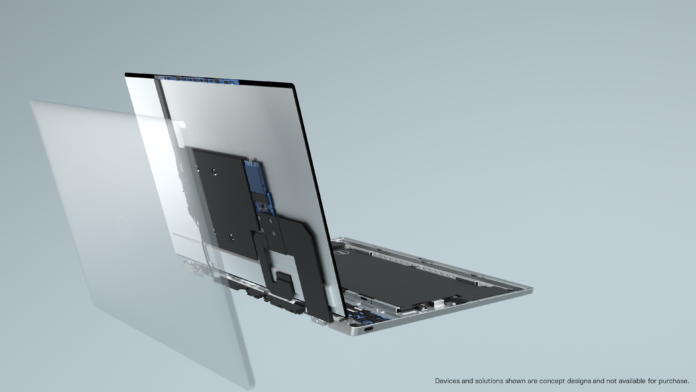 Dell presents a new concept of sustainable design, called Luna. The project includes a set of actions in the design and production of equipment to reduce carbon emissions to the environment and facilitate the reuse, repair and reconstruction of equipment.

Luna was created as a concept for future implementation of best practices to be evaluated for application in the company’s portfolio in the near future, but Dell already estimates that, with the application of the concepts, an estimated reduction can be expected. 50%. the total carbon emission derived from the products.

Developed in partnership with Intel, the Luna concept, part of a suite of company initiatives representing Dell’s commitment to accelerating the circular economy and ambitious goal of achieving zero greenhouse gas emissions, provides a complete redefinition of component design and a set of practices to push reuse to the limit and dramatically reduce the impact of PC production on the environment.

An example of a change in internal layout is relocating the motherboard to the top cap and reducing its size, bringing it closer to a surface with greater exposure to cold air. This displacement, combined with the separation of the battery charger at the base, leads to better heat distribution and can completely eliminate the need for a fan. These innovations can significantly reduce overall power needs, paving the way for smaller, more powerful batteries.

In addition, the keyboard parts have been relocated to be further separated from other components and to simplify recycling, in addition, the state-of-the-art battery ensures long charges and can be maintained for many years of use, increasing reusability beyond first shelf life of the product. On the outside, the palm rest assembly has been intentionally redesigned to facilitate repair and reuse.

“Our idea of ​​creating the Luna concept started with a simple ‘what if?’ Thinking about the possibilities for a better world, this was the starting point for us to develop design solutions that reduce our impact on the environment. Luna is a great example of how we are committed to exploring new paths to dramatically accelerate progress towards our most ambitious goals, such as zero carbon emissions, ” says Glen Robson, Chief Technology Officer, Customer Solutions Group, Dell Technologies. Testing what may be possible is only the first step, the next is to take these innovative sustainable design ideas and evaluate which ones have the greatest potential for scale in our product portfolio”, completes the executive.

Another of the actions proposed by the Luna concept is a new biological base on PCB boards, made with flax fiber at the base and water-soluble polymer, as a glue for fixing the components. This change would replace the traditional plastic laminates used in this process by polymer, which can be dissolved in water, which means facilitating the recycling process since professionals will be able to separate metals and parts from the plates more easily.

Intel Presents Its Process and Packaging Innovation Roadmap To 2025