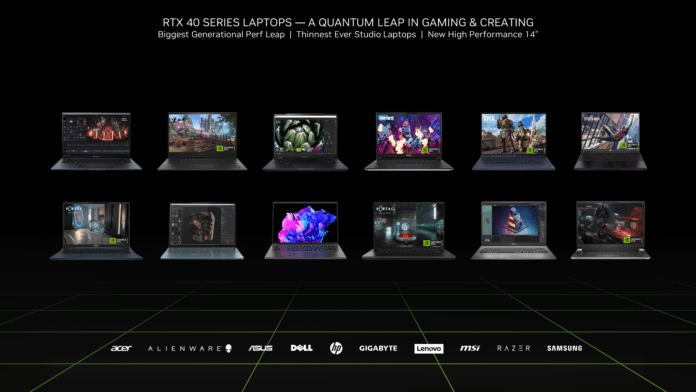 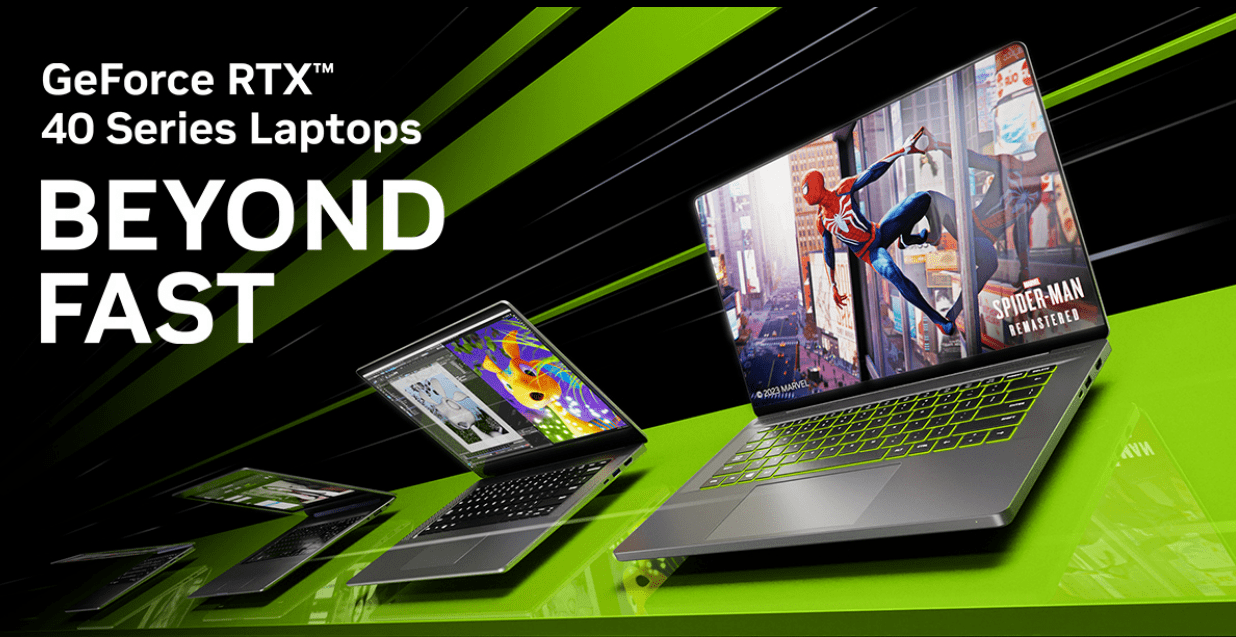 The world’s fastest laptops, powered by GeForce RTX 4090 and 4080 Laptop GPUs run up to 3X more efficiently than our previous-generation flagship laptops, enabling users to game at previously impossible detail levels and speeds, and to power through creative workloads in a fraction of the time, all in thin and light form factors. 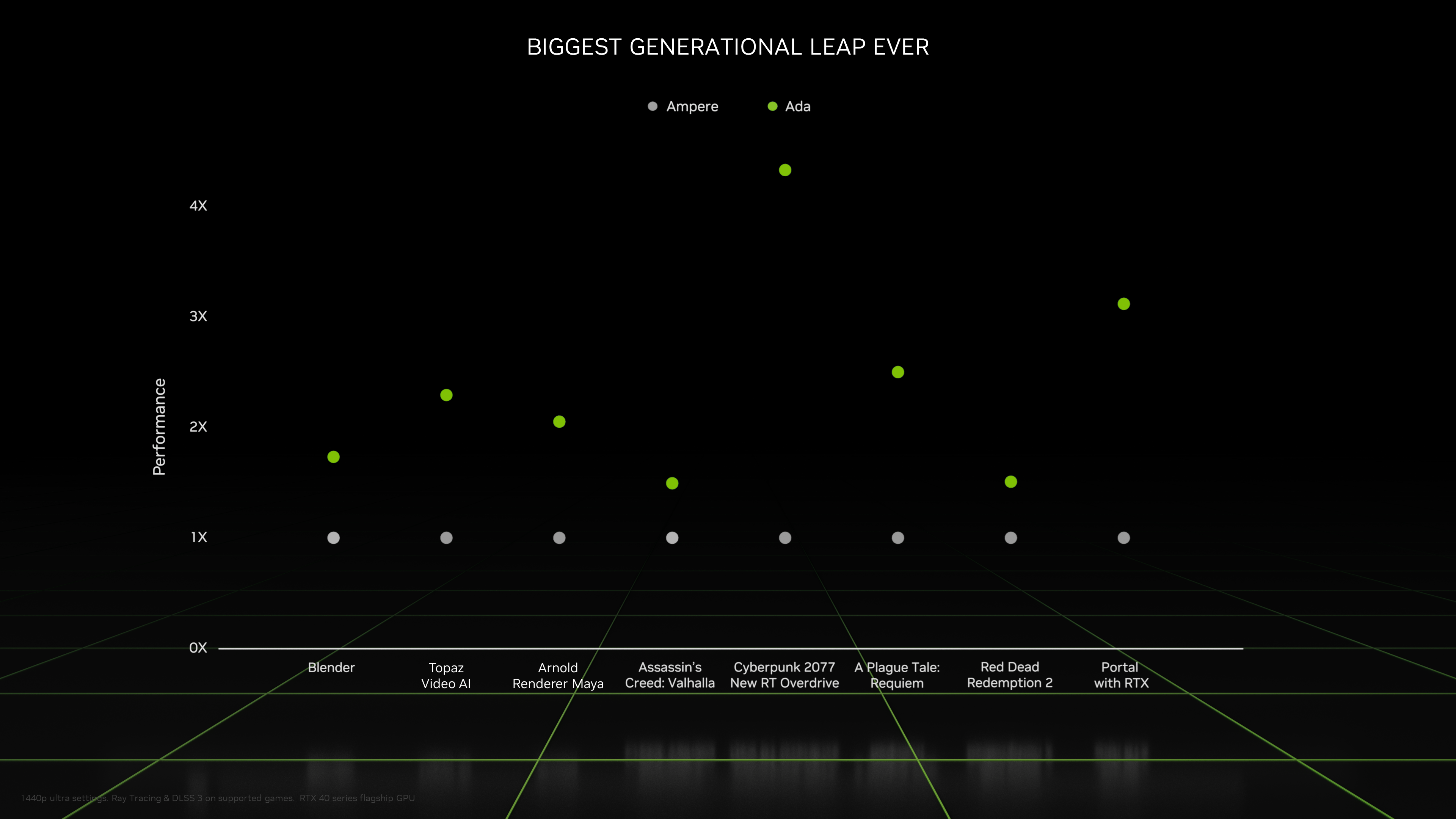 Play A Plague Tale: Requiem, Microsoft Flight Simulator, F1 22, Loopmancer, F.I.S.T.: Forged In Shadow Torch, and more at Ultra settings at over 100 FPS. Collaborate in 3D scenes with Omniverse at a smooth 4K60 with DLSS 3. Export videos in half the time with Ada’s dual AV1 encoders. And connect three 4K displays for the ultimate immersive experience in professional-grade driving simulators. 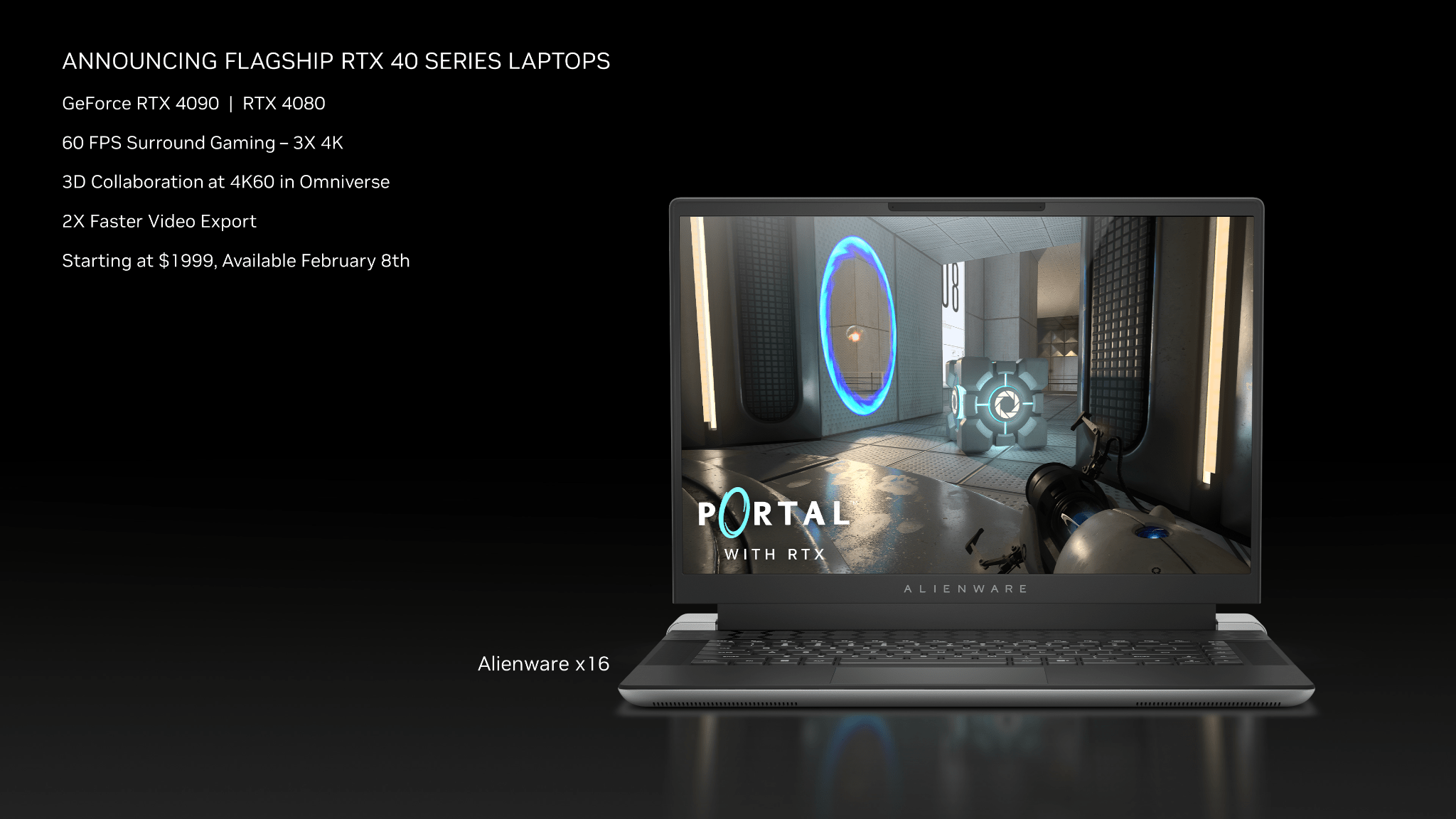 GeForce RTX 4070, 4060 and 4050 Laptop GPUs deliver up to RTX 3080 flagship class performance at one-third of the power, improving thinness, acoustics, and thermals.

Play at up to 80 FPS at 1440p in Cyberpunk 2077 at Ultra settings, render complex Blender scenes in mere minutes, and take advantage of Ada’s AV1 encoder for better quality video editing and live streaming. 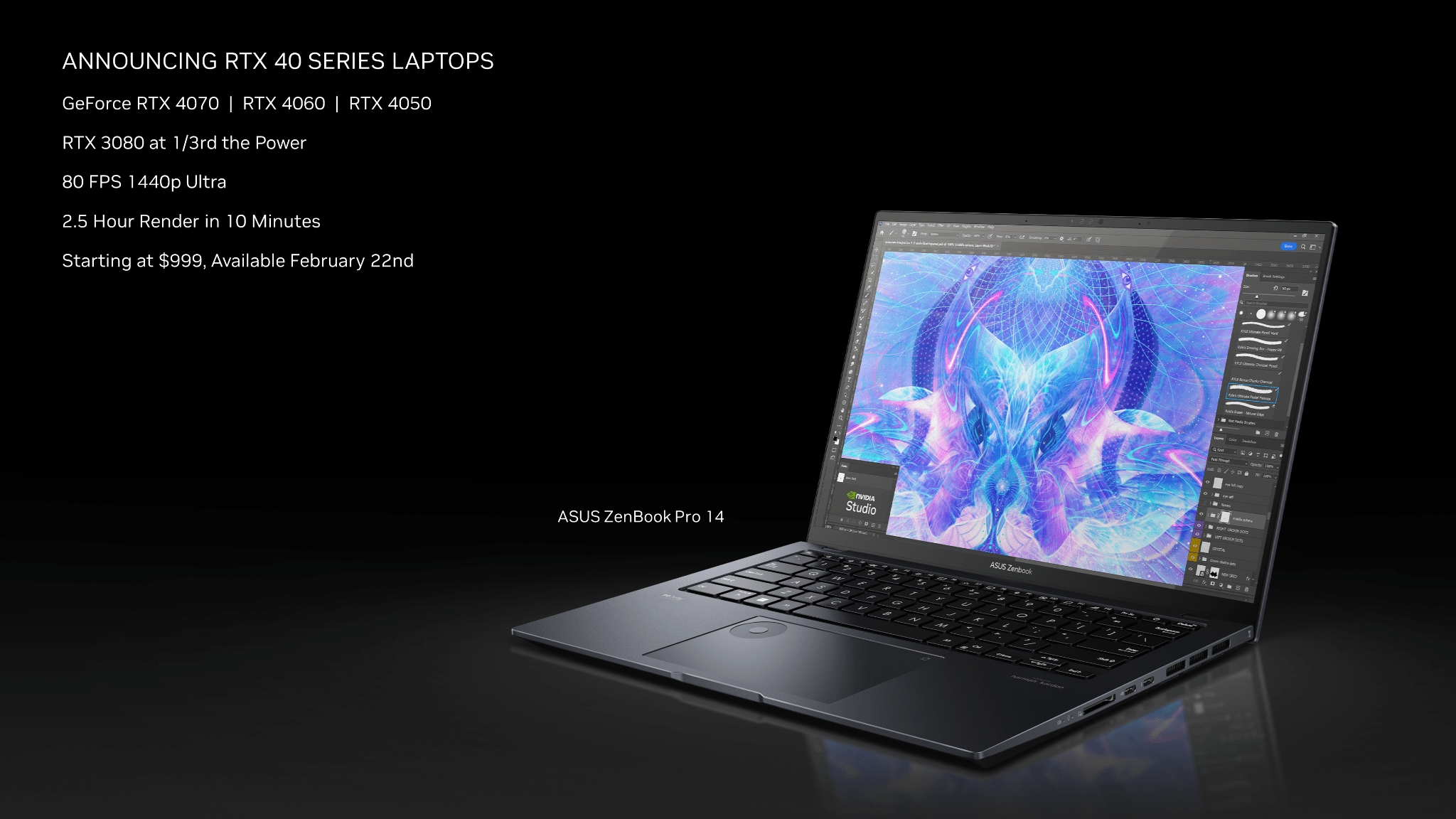 The Ada architecture delivers such incredible improvements in all regards that we can now bring high performance laptop GPUs to 14” devices, the fastest growing laptop form factor. These smaller laptops are lightweight, slip into virtually any bag, and are perfect for students and people on the go. But before now, 95% were limited to basic tasks and apps. 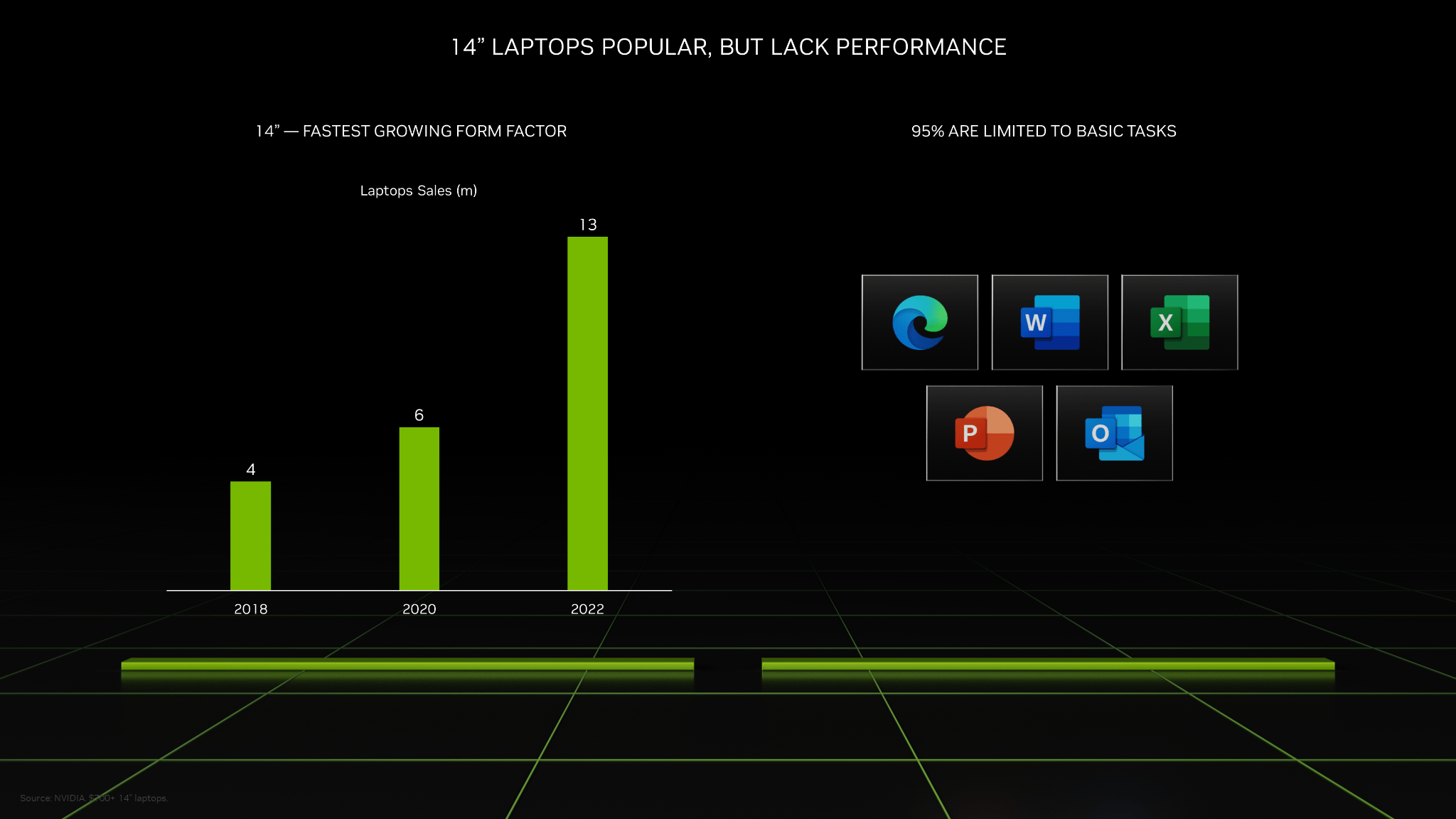 With the power of Ada and 5th generation Max-Q Technologies, 14” laptop performance has increased by 20X, turning them into portable powerhouses capable of any task. Render 3D in Blender, edit video in Adobe Premiere Pro, livestream with NVIDIA Broadcast AI effects and the NVIDIA encoder in OBS, and play the latest games at ultra settings and fluid frame rates. 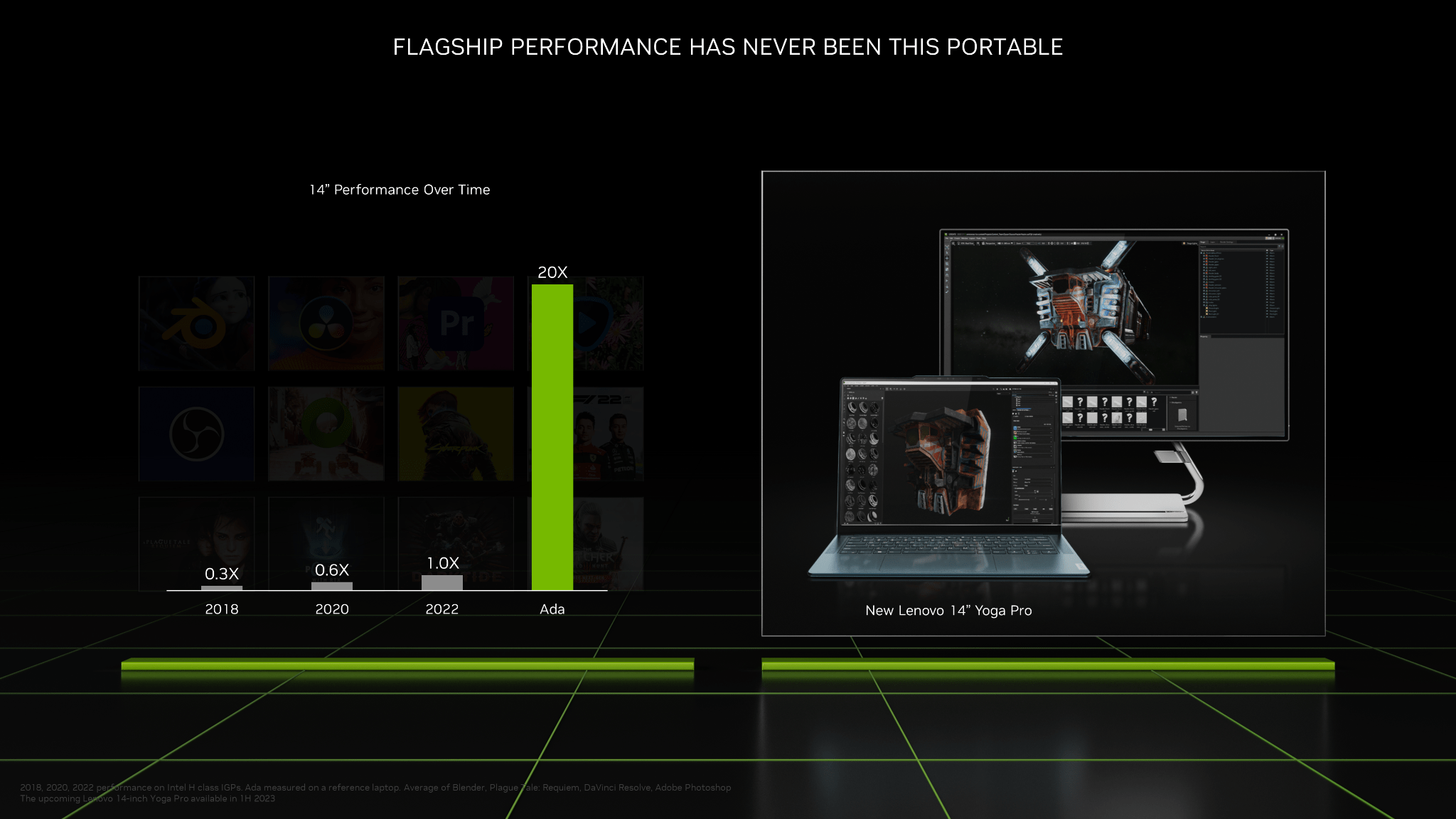 NVIDIA revolutionized laptops in 2017, when we reimagined gaming laptop design with an extreme focus on efficiency. Working with laptop OEM partners we developed a system design approach that delivers high performance in thin gaming and Studio laptops, called Max-Q. Every aspect was optimized for power efficiency, from the GPU architecture to the laptop layout and construction, to core systems and graphics software. And we developed Optimal Settings for laptops applied via GeForce Experience. It fundamentally changed how laptops are built.

With each new GPU generation, Max-Q has improved thanks to continual innovation, and today alongside the launch of our GeForce RTX 40 Series Laptops, we’re introducing 5th Generation Max-Q Technologies, which radically enhance efficiency, and further accelerate gaming performance. 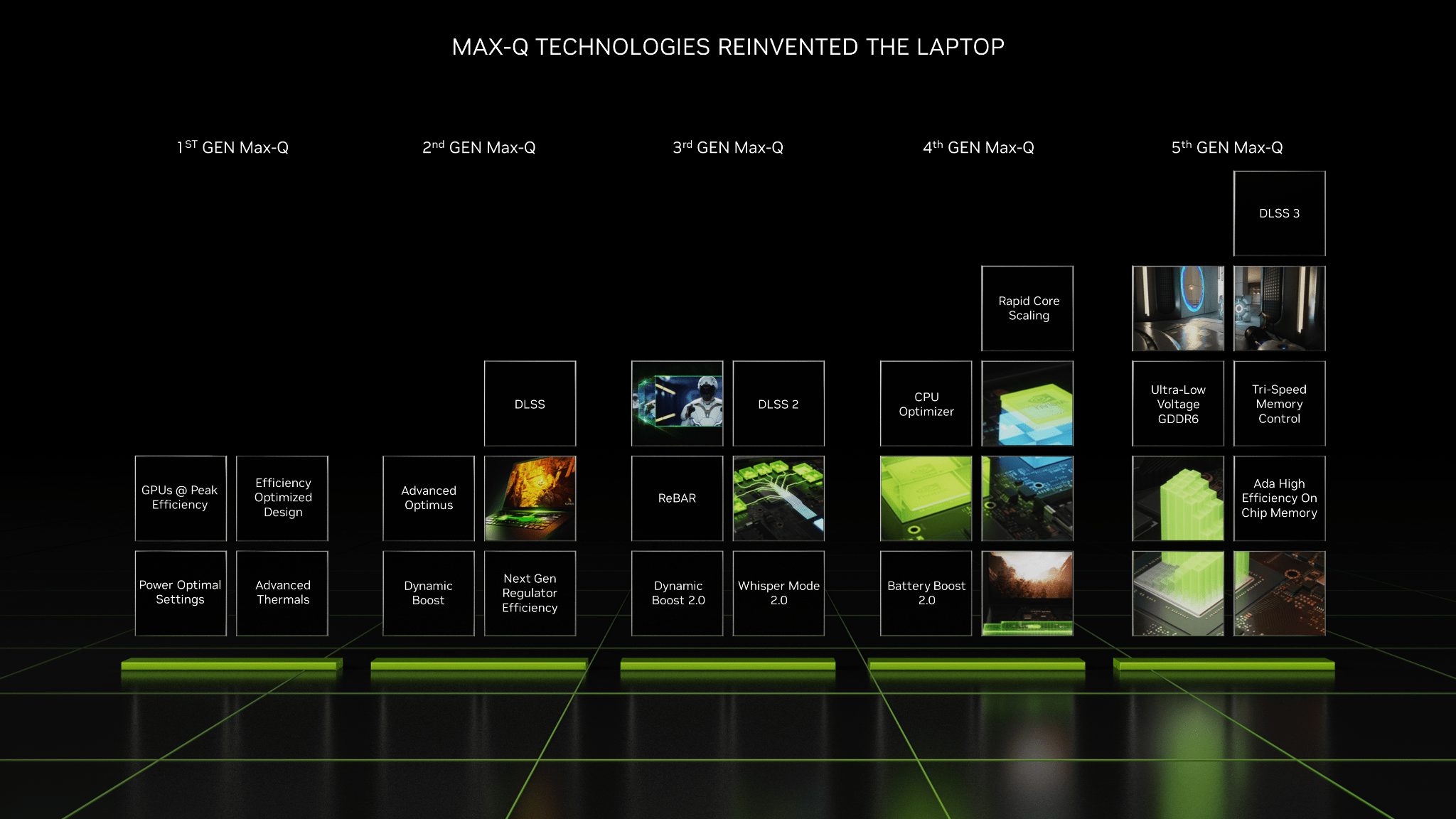 DLSS 3 uses AI and Tensor Cores to reduce the amount of rendering required by your GPU, improving frame rates by up to 4X when performance isn’t limited. When you optimize using Whisper Mode, power usage plummets and efficiency increases, in turn lowering system temperatures, reducing the speed at which fans run, giving users a quieter experience. And when you’re operating on battery, it helps you game for up to 2X as long.

Altogether, Max-Q has increased laptop efficiency by 22X over the past 6 years, giving users a massive boost to battery life, and much more efficient plugged-in performance.

For livestreamers, the new AV1 encoders will bring a massive boost in encoding efficiency, enabling 4K60 at 10 Mbps streams, whereas with H.264 users have to use 20 or even 25 Mbps to get good quality at 4K.

For users editing video, further efficiency gains come courtesy of the new NVENC dual AV1 encoders in GeForce RTX 4080 and 4090 GPUs, which can use both encoders in parallel to export videos at up to 2x faster.

Every existing GeForce innovation and enhancement is also available for buyers of GeForce RTX 40 Series Laptops, including NVIDIA Reflex system latency reduction, G-SYNC on the laptop display and connected external displays, GeForce Experience one-click overclocking and game optimization, Shadowplay recording and streaming, and so much more.

New DLSS & Ray-Traced Games To Play On Your Laptop

Head over to our new RTX games article to learn about the latest and greatest tiles adding DLSS and advanced ray-traced effects. Over 250 released games and apps already support DLSS, and many of 2023’s most anticipated titles will also incorporate its game-changing AI-powered tech. With all of the above tech incorporated into GeForce RTX 40 Series laptops, the definitive experience in each title will be found on GeForce.

Today, we’ve made many new NVIDIA Studio announcements, which you can read about in detail in our latest NVIDIA Studio article. Here are a few of the highlights: 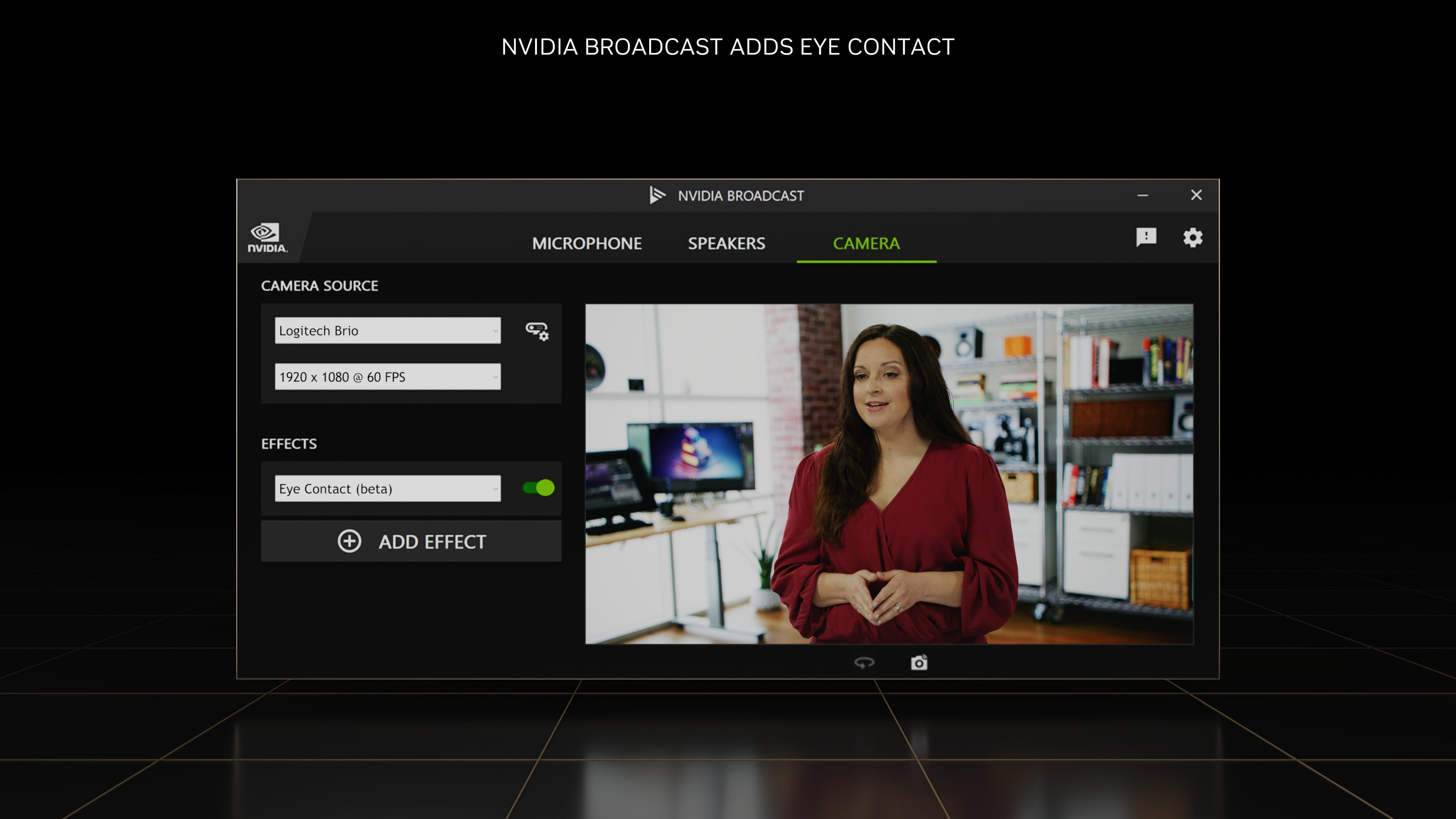 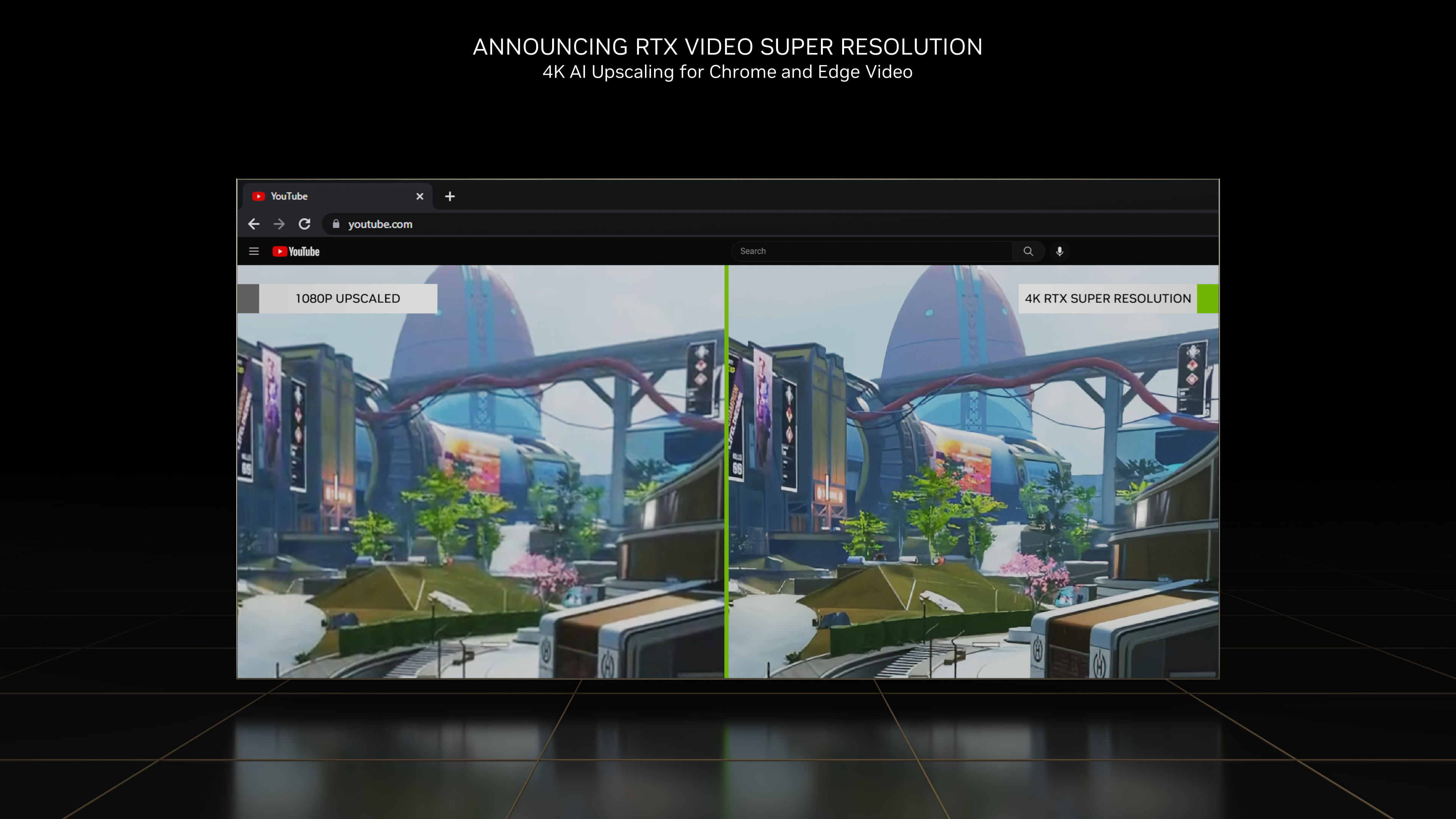 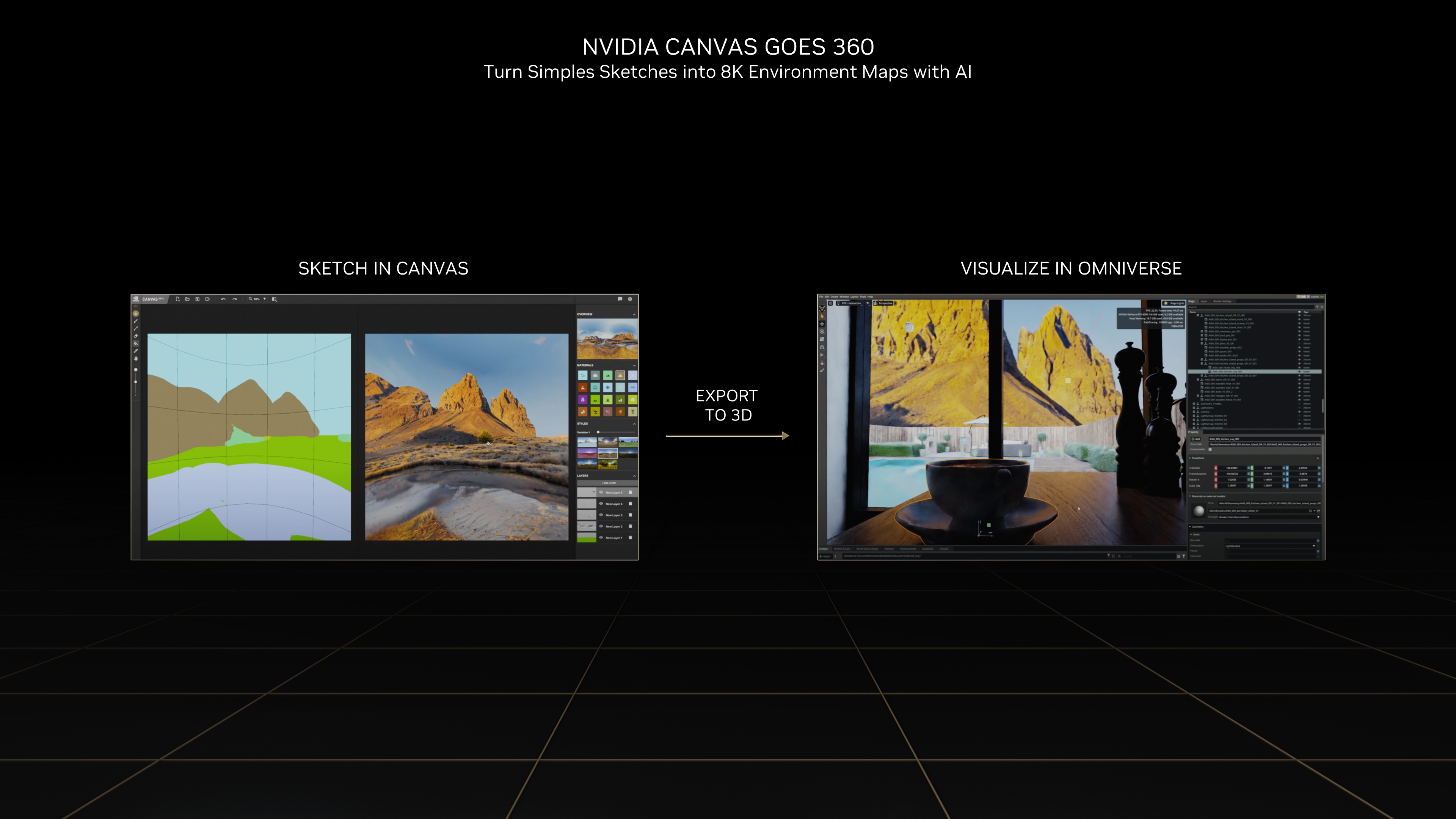 There’s much more, for NVIDIA Omniverse and other applications, so be sure to check out the new NVIDIA Studio blog for details.

A huge variety of models from Acer, Alienware, ASUS, Dell, Gigabyte, HP, Lenovo, MSI, Razer and Samsung are coming soon, so be sure to check out their websites for further details.