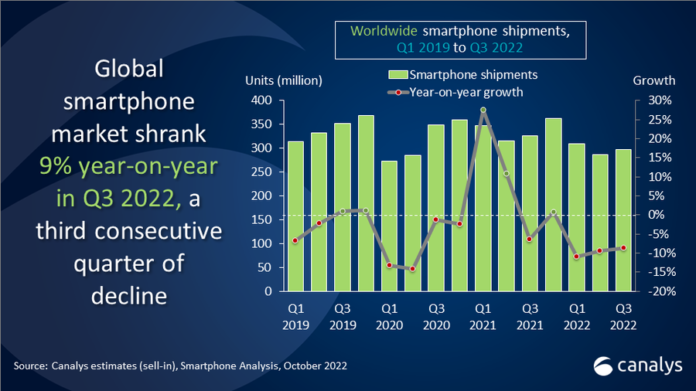 In Q3 2022, the global smartphone market recorded its third consecutive decline this year, dropping 9% year-on-year, marking the worst Q3 since 2014. The gloomy economic outlook has led consumers to delay purchasing electronic hardware and prioritize other essential spending. This will likely continue to dampen the smartphone market for the next six to nine months. Samsung retained its leading position with a 22% market share driven by heavy promotions to reduce channel inventory. Apple was the only vendor in the top five to record positive growth, improving its market position further with an 18% share during the market downturn thanks to relatively resilient demand for iPhones. While Xiaomi, OPPO and vivo continued to take a cautious approach to overseas expansion given domestic market uncertainty, retaining 14%, 10% and 9% global market shares, respectively.

“The smartphone market is highly reactive to consumer demand and vendors are adjusting quickly to the harsh business conditions,” said Canalys Analyst Amber Liu. “For most vendors, the priority is to reduce the risk of inventory building up given deteriorating demand. Vendors had significant stockpiles going into July, but sell-through gradually improved from September owing to aggressive discounting and promotions. The pricing strategy of new products is cautiously crafted, even for Apple, to avoid significant pushback from consumers who now tend to be very sensitive to any price hike,” added Liu.

“As demand shows no signs of improvement moving into Q4 and H1 2023, vendors have to work on a prudent production forecast with the supply chain while working closely with the channel to stabilize market share,” said Canalys Analyst Sanyam Chaurasia. “Going into the sales season, consumers who have been delaying purchases will expect steep discounts and bundling promotions as well as significant price reductions on older generation devices. Compared to the strong demand period of the previous year, a slow but steady festive sale is anticipated in Q4 2022. However, it will be too soon to see the upcoming Q4 as the real turning point of market recovery.”