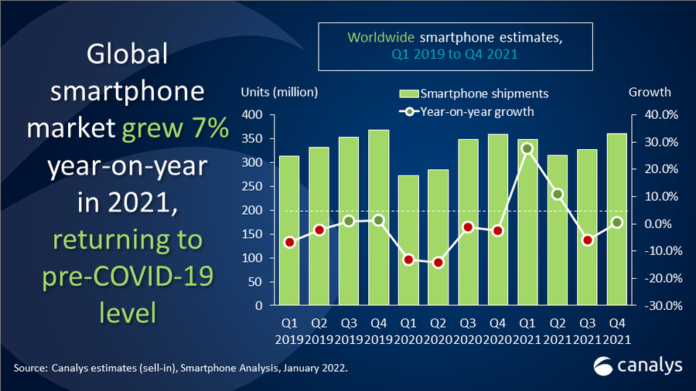 The league table of top five smartphone vendors in 2021 was unchanged from 2020, as all were impacted by the severe supply shortage throughout the year. Samsung remained top with nearly 275 million smartphones shipped in 2021, maintaining 20% market share globally. Apple delivered another strong holiday quarter driven by its new iPhone lineup, taking its full year shipments to 230 million and year-on-year growth of 11%. Xiaomi closed the year with over 191 million smartphones shipped. OPPO and vivo placed fourth and fifth, with smartphone growth clocked at 22% and 15% respectively.

“The road to recovery has been challenging for the industry, as demand still outstripped supply in many areas,” said Canalys Analyst Sanyam Chaurasia. “Many vendors delivered their best performance in 2021, expanding smartphone shipments by double digits to compare with, and surpass, pre-COVID-19 levels. The key growth driver for the industry came from the vast mass market segment, especially in Asia Pacific, Middle East and Africa as well as Latin America. Unfortunately, this segment also witnessed the most severe component shortages, especially in low-end 4G chipsets. Going forward, the supply imbalance will ease gradually as chipset vendors ramp up production, and the price of 5G chipsets falls, which will help 5G devices become the next volume driver in 2022.”

“The pandemic has not softened the high-end smartphone segment, however, as Apple and Samsung have shown,” commented Canalys Research Analyst Le Xuan Chiew. “Apple’s record-breaking year in smartphones is no surprise, but Samsung was hit hard by supply and production issues in the year, and its key volume driver, the Galaxy A-series, saw shortages across the world. However, Samsung focused on driving profitability, especially through its high-end portfolio. The Galaxy S and Z families have been critical to offset its falling volume share against Chinese vendors in the global market. With an ASP of over US$1500, Samsung’s foldable smartphone portfolio has so far met expectations of eight million shipments in a year, tripling the shipments from a small base. Samsung finished 2021 with incredibly healthy earnings, signaling a strong comeback in the coming year.”

“The pandemic has made consumers more dependent on mobile, from vaccine records to daily grocery shopping,” added Canalys VP of Mobility Nicole Peng. “While smaller vendors should focus on the pockets of opportunities to address the individual markets’ pent-up demand, leading players are increasingly positioning themselves as cross-category device players, with the technology vision and infrastructure to capture broader opportunities centered around smartphones, as consumers increasingly embrace the digital world.”