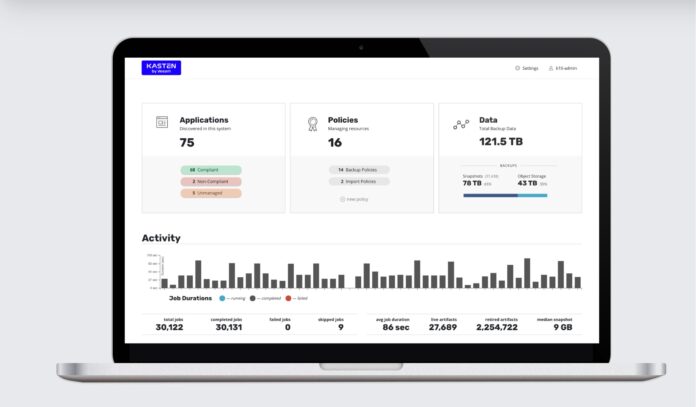 Kasten by Veeam announced the NEW Kasten by Veeam K10 V5.5 Kubernetes data management platform. Kubernetes applications are growing at a rapid pace. However, operations teams with the required skill sets to meet these demands are not able to keep up, which has made scaling simplicity of operations imperative. Purpose-built for Kubernetes, the latest release of Kasten by Veeam K10 V5.5 bridges this skills gap by introducing powerful new capabilities around Autonomous Operations and Cloud Native Expansion. As a complement to the suite of Modern Data Protection and recovery solutions offered by Veeam to protect all data assets across virtual, cloud-native, SaaS, Kubernetes and physical workloads, these advancements will address the challenges historically found in Kubernetes around operational complexity at scale, especially due to the diversity of deployment environments.
“Organizations need to not only transition to a new, modern cloud native development technology and workflow, but also require operations at scale without having an army of Certified Kubernetes Administrators,” said Gaurav Rishi, vice president of product and partnerships at Kasten by Veeam. “This is where Kasten K10 shines — by scaling simplicity. Our latest release augments an organization’s workforce so that the enterprise can realize cloud-native technology and operational benefits by automating several data management tasks.”
Backing up and protecting Kubernetes environments on top of designing and maintaining cloud-native deployments is a compounding issue for an already short-staffed workforce. Yet at the same time, the percentage of enterprises investing in Kubernetes and containerization in production continues to grow, making it critical for organizations to optimize and de-risk their large Kubernetes investments. Enabling intelligence and automation while broadening technology partnerships and business agreements ensures enterprises have wide access to the most up to date advancements across a spectrum of technologies in the backup and recovery process for scaling simplicity.
New capabilities of Kasten K10 V5.5 include:
“Kubernetes adoption and containerization are increasingly becoming mainstream across enterprises, but current manual steps, constant oversight and ever-present cyberattacks continue to inject complexity in the Kubernetes backup environment, hampering DevOps teams’ ability to scale,” said Danny Allan, CTO and senior vice president of product strategy at Veeam. “With Kasten by Veeam K10 V5.5, customers can ensure adequate data protection in Kubernetes environments by offering autonomous operations that support cloud native expansion goals. What’s more, Kasten by Veeam’s membership with The Open Source Security Foundation strongly underlines the company’s commitment to contributing to security best practices and education for both Kasten and Veeam customers, as well as the industry at large.”
General availability of the new Kasten K10 V5.5 is expected later this quarter. To learn more about Kasten and see Kasten K10 V5.5 in action, visit Kasten by Veeam at KubeCon and CloudNativeCon North America.