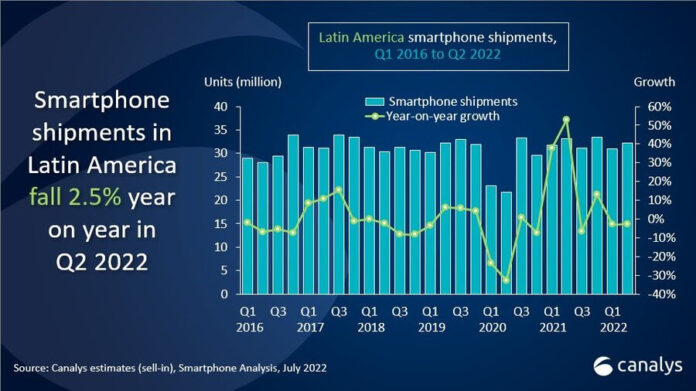 Latin American smartphone shipments fell 2.5% year on year in Q2 2022, coming in at 32.2 million units. This follows a 2.5% drop in the last quarter, making the first two consecutive declines in the Latin American region since the beginning of the pandemic in Q1 and Q2 2020. But Latin America’s Q2 figure beats the overall global year-on-year decline (-9%), though there are growing concerns about specific markets, such as the Peru and Chile, which suffered double-digit falls during the quarter.

“The second quarter deepened the trend of polarization, with both the sub-US$100 and US$500-plus price bands strengthening,” said Canalys Senior Analyst Damian Leyva-Cortes. “This trend is mainly benefiting Apple, as its entire portfolio is priced over US$500. Apple coupled the successful launch of the iPhone 13 series with a conservative pricing approach, which, in a hyperinflationary environment, brought good results in the form of double-digit year-on-year shipment growth of 16%. Lenovo and Samsung also benefited from this trend to elevate the value of their shipments, though shipment numbers were hurt by exposure to other price bands, with both companies seeing falls below the overall market decline.”

Leyva-Cortes added, “Xiaomi’s growth in Brazil and Argentina this quarter helped it to maintain momentum in the region and close the gap on the second largest vendor, Lenovo. Both Lenovo and Samsung are oversupplying as much as they can to stop Xiaomi from establishing itself in Argentina and Brazil, while they all (including Xiaomi) are oversupplying in Mexico and Colombia to protect their shares in these key markets from growing competition.”

“At the lower end, competition has intensified due to an increasing number of incoming vendors, especially in Mexico and Colombia,” said Leyva-Cortes. “Shipments in the US$100-to-US$500 price band still represent more than 70% of all shipments in the Latin American region, and in some markets, such as Chile and Colombia, are still growing. As an example, vivo is taking share from more established vendors, particularly in Chile and Colombia, growing at 80% and 110% respectively. Another example is HONOR. After the launch of its more accessible X series, and supported by substantial marketing budgets, it has grown its share, reaching 4% in Peru, 3% in Colombia and 2.6% in Mexico in Q2 2022. While Latin American markets are hit by inflation, there are still many unmet demands. So, in the meantime, smartphone vendors must focus on end users and their different wants and needs. As, for now, channels, and especially operators, are treating all smartphone vendors and their products the same.”

“It is expected that economic headwinds will affect shipments in the short term, meaning the overall Latin American region will see 0.8% growth in 2022 and 2.5% growth in 2023. This means that Latin America would be the world’s only region to grow in 2022, though it would also be the slowest region to recover in 2023. But, when looking at a country level, the picture varies greatly from market to market.”