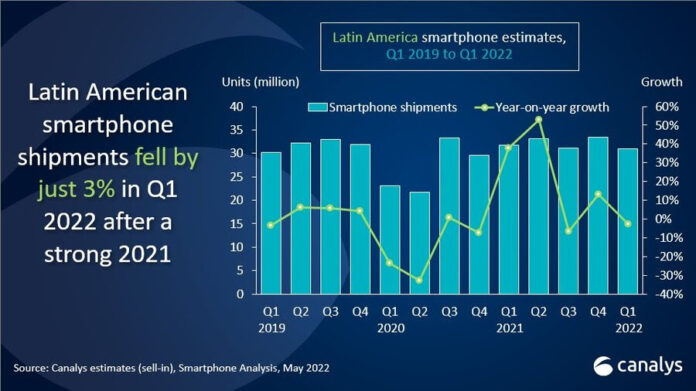 After a strong 2021, the Latin American smartphone market remained resilient in Q1 2022. Shipments fell slightly by 3% against Q1 2021, but worldwide shipments were down 11% year on year. Samsung’s market share returned to 43%, its highest since Q2 2020, as the company once more grew its lead over second-placed Lenovo, which shipped 5.5 million units for an 18% share. Xiaomi came third as it continues to focus on growing its presence in the region, boosted by more device allocations and new product launches. Apple ranked fourth, helped by an improved supply of its iPhone 13 series, while OPPO entered the top five for the first time, thanks to its strong performance in Mexico.

“Markets such as Mexico and Colombia are the most buoyant, thanks to the investments international vendors have made to drive demand. Both markets have strong telco players in device distribution channels, along with low entry barriers and a good perception of Chinese consumer technology products due to Huawei’s legacy. It is also astonishing to see how quickly these markets have replaced LG’s and Huawei’s shipments with other brands, which shows the dynamism and openness of the two markets,” added Leyva-Cortes.

“Compared with the macroeconomic challenges other regions are facing, many markets in Latin America have a relatively optimistic outlook. Vendors will shift strategic priorities toward the region, which is forecast to see 4% growth in smartphone shipments in 2022. As telcos are still a dominant regional force in the channel, emerging players should use telco partnerships to explore as many markets as possible. For more established brands in the region, such as Xiaomi and OPPO, future opportunities lie in the more protectionist markets, as there is much unmet demand, especially from the younger consumer segments where the dominant players are not paying attention,” said Leyva-Cortes.