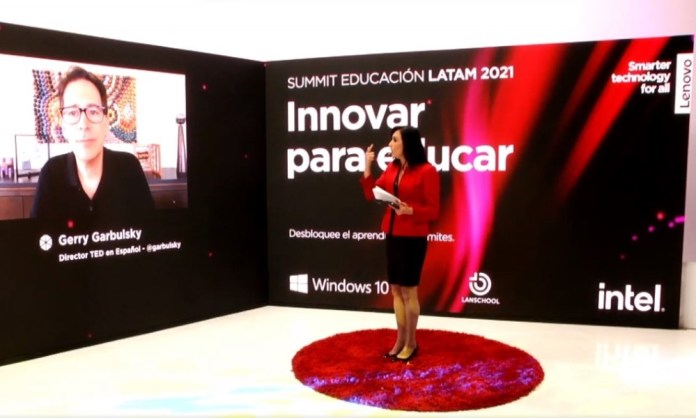 “Lenovo remains firm in its commitment to bring technology closer to people and companies in order to improve and optimize the tasks they have to face in their daily lives. Education is a fundamental pillar of economy and society, that is why Lenovo is optimistic and believes that the future has brought a shared mission to positively impact the teaching and learning of more than 1.3 billion people who are studying remotely,” the company highlighted at the interesting event.

At the conference, Lenovo convened speakers from recognized technology companies and educational centers to share experiences on the new digitally native options that not only break the stigma of distance education, in which, according to surveys, 77% of the Students struggle due to poor interaction with teachers, but reinforce the power of technology to create smart educational models.

Experts on innovation for the education and leaders of the main public and private universities in Latin America participated in the Virtual Summit of Education Latam 2021: “Innovate to educate” such as: Intel, Microsoft, LanSchool, Pontificia Universidad Javeriana de Colombia, Universidad de los Andes de Chile, Institute for the Future of Education in Mexico and the UNESCO Education Program; with the Mexican journalist Karla Iberia Sánchez as host and Gerry Garbulsky, from Ted in Spanish, as keynote speaker.

After a welcome by Gaspar González Concha, Vice President & Lenovo LAS General Manager; Gerry Garbulsky, Founder and Director of TEDxRíodelaPlata, during his lecture “Exponential Education Solutions for Education in 2021” left a couple of other interesting ideas to promote invention and not lose motivation in the search for innovation: “In most cases we are not going to invent anything innovative, but every so often we are going to help change someone’s life,” he said about it. For this, he gave as an example the first patent on the suitcase on wheels, which only happened in 1970: “We carried heavy suitcases and on the other side were wheels, but no one thought of combining them. If we look at the innovation around us, it is much less like inventing the wheel and much more like putting wheels on a suitcase; the game of innovation is to see what already exists and see if we solve something that helps someone, that adds value,” he said.

In the same sense, he mentioned YouTube as an example, whose founders “did not invent the wheel, they took things that were already there, and in a short time they revolutionized the way we create, consume and distribute audiovisual material. “And he invited attendees from study centers throughout the region to see “what are the pieces in the educational system that we can combine to change education.”

The second idea that Garbulsky proposed in his presentation had to do with a reality: “You have to innovate but there are many restrictions, cultural, of course, legal, regulatory, technological; and when we see them it is very easy to blame them because it does not depend on us.”

To turn this argument around, the Ted speaker in Spanish gave as an example what happened to Phill Hansen, an American cartoonist who bases his art on the pointillism technique, who was diagnosed with a degenerative disease of the nervous system that caused him a tremor in the hands that made him stop drawing. Depressed by this situation, he listened to his doctor’s advice: “embrace your tremor. “It was then that he decided to try to draw even with this difficulty, first, and then to impose other restrictions on himself, for example, making a creation just with only 1 dollar in budget: he asked for paper cups at Starbucks or used a pencil that had cost him 85 cents.

Finally, Garbulsky talked about to the Clubs Ted Ed, a program within TEDx Río de la Plata that tries to help the students find a passion, develop an idea and how to communicate it, through 10 meetings, that conclude in an event in where each student gives a small talk on the idea. “It impacts the entire educational community,” he said.

“THE INTEREST OF THE PEOPLE WHO ARE BEING EDUCATED IS NOT CONSULTED. IN THE EDUCATION OF THE FUTURE WE HAVE TO CREATE A MORE ACTIVE LISTENING. ”

Lenovo Technology for the education of the future

Fernando Amado López, Latin America LanSchools Sales at Lenovo, explained that as a teacher for more than 20 years he knows the needs of teachers in virtual classes: “When we are in front of the class there are many things to take into account, if they are paying attention, many circumstances that we have to control.

Lenovo’s LanSchool Classic classroom management software for the digital classroom, designed to be used in a local network (LAN), comes to solve this problem, he said, since it allows the teacher to:

– Send a message through Notepad to all or some student in particular.

– Put a series of questions to the students’ vote, such as True or False.

– Open in the students’ computers certain applications, like the calculator, or a determined program, maximizing the time of education.

– Show the activity made by a student to the rest of the classroom.

– Control the student’s computer, for example, by entering a certain page on his Web, and by limiting access to Web pages.

– Block students’ computers with a blank page so that they pay attention to the teacher.

– Turn off one or all computers from your computer.

For his part, Samir Estefan, LAS Education Manager at Lenovo, showed how LanSchool Air–which brings the most used functions of LanSchool to a cloud-based platform– is complemented with Horus, a cloud platform that allows measurements and analysis on the machines (Desktop, Laptop and Workstation) of the company.

Using an agent installed on the machine, an offline analysis can be carried out on: the number of active machines, percentage of use of the software installed in the company, average hours of use per day, percentage of performance of the installed base, Lenovo Device Manager. “We can see the hardware inventory, by schools, countries, types of users, applications that are used the most, in dynamic graphics by city, school, etc., or see what is happening with a particular machine, such as RAM performance, how much CPU is used and see if it is oversized and thus optimize budget, see what software I have installed in each one, etc…” he highlighted.

Then it came the presentation of Erick Böhme Calfio, Lenovo’s Business Development Manager Collaboration; he presented Blended Classroom, a solution that the company developed together with SmartHub, its system of videoconference all in one, combined with cameras and one interactive screen for hybrid learning.

The executive explained that the teacher can connect his laptop to an HDMI connector to show his presentation for the students who are in the classroom and also for those who are remote. Additionally, with a click, the camera pointing at the blackboard is activated, the content of which is digitized, so that the teacher cannot cover what he has written to the students; it can even be erased and rewritten so that new text is digitized again.

Then the panel “The future of education” with speakers of the aforementioned educational centers of the region began, to then give way to the presentations of Jorge Ortega, Microsoft Partner Development Manager; and Juan Pablo Ferrero, European Director for the Education and Public Sector Sales team at Intel.

“The decade from 2020 to 2030 is going to be significant and memorable. Investment in technology will make education an intelligent process with access through different devices and remote study models, thus achieving an exponential scope,” said Samir Estefan.

Founding partner. Latino Alliance of Media and IT Marketing Agencies

Intel Announces Initial Investment of Over €33 Billion for R&D and...