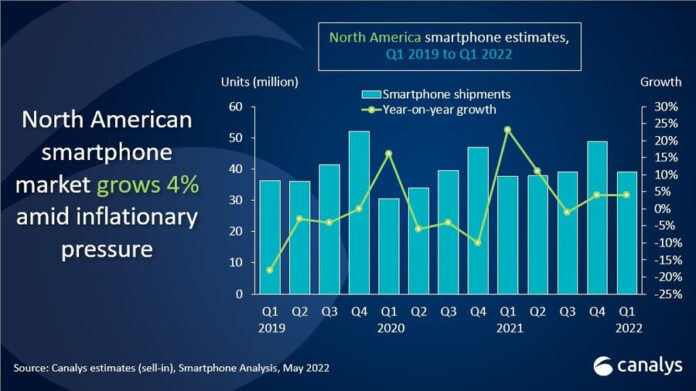 North American smartphone shipments reached 39.0 million units in Q1 2022, up 3.7% year on year. Apple grew 19% to achieve a 51% market share, powered by the strong performance of the iPhone 13. Samsung was up 1% to take a 27% market share, thanks to its new S series and A series devices covering a range of price points. Motorola defended its strong Q4 2021 performance, which saw its focus on taking over LG’s former carrier slots and supply capacity pay off. TCL and Google completed the top five, with 4% and 3% market shares respectively.

“The North American smartphone market has been buoyed by Apple’s strong growth,” said Canalys Analyst Brian Lynch. “This quarter, the iPhone 13’s high popularity was the key driver. With global demand more uncertain, Apple has shifted more devices back into North America after prioritizing other regions in Q4 2021, allowing it to greater fulfill demand and deliver on backorders from the previous quarter. In addition, the launch of the latest edition of the iPhone SE offers an affordable option for many of North America’s fiercely loyal iOS users. Despite not being mmWave-enabled, carriers’ increasing investments in C-band and sub-6GHz spectrums will open the door for the iPhone SE’s market growth in the coming quarters.”

“Motorola is the new third brand in North America after it replaced LG last year,” said Canalys Research Analyst Runar Bjørhovde. “Motorola used its wide carrier presence – particularly with prepaid- and mid-range-focused carriers – to discover and rapidly leverage new opportunities, while also forming new supply partnerships. Google is on the offensive to take market share, building on its wide carrier presence and unprecedented investment in the Pixel brand, both on traditional advertising campaigns and a new NBA partnership. It focused on the Pixel 6 in Q1 but will look to expand further in the rest of the year, with a recently launched portfolio including the upcoming Pixel 7 flagship, affordable Pixel 6a, Pixel Watch and Pixel Buds.”

“High inflation places an enormous amount of pressure on carriers in North America as rate increases will be necessary,” said Lynch. “Heavy discounting and high trade-in values are being used to lure in and retain customers for the region’s biggest telcos, easing pressure on the high-end smartphone market. Supply will remain a key bottleneck for the top vendors in the upcoming quarter, but North America will continue to be a priority and is likely to maintain healthy supply levels. The North American market is well placed to avoid any significant volatility in shipments despite the uncertain outlook of its economy.”