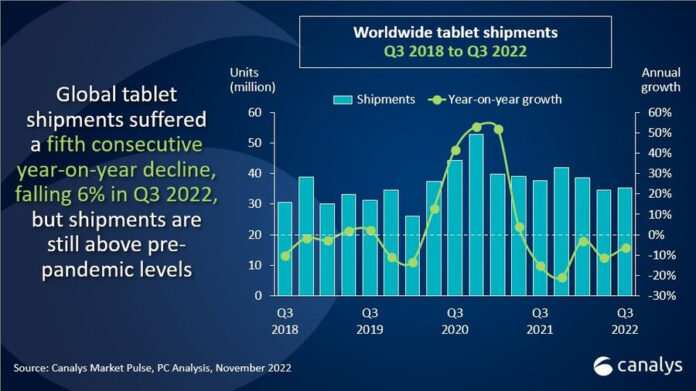 The third quarter of 2022 brought about a fifth consecutive year-on-year decline for the worldwide PC (including tablet) market, according to the latest Canalys data. Total shipments fell to 105.6 million units, a 14% drop from Q3 2021 and a sequential increase of just 1% from Q2 2022, which saw major supply disruption due to COVID lockdowns in China. Demand across all product categories and end-user segments was stifled by worsening macroeconomic conditions, as consumers and businesses alike adopted a more cautious approach to spending on devices. Tablet shipments fell 6% in Q3 to 35.3 million units, while Chromebook shipments were down 29% at 4.2 million units, the lowest third-quarter shipment number since 2019.

The tablet market decline continued apace in Q3 following the 11% drop in the previous quarter. Apple led the market but its iPad shipments fell 12% year on year to 13.4 million units. Second-placed Samsung posted shipments of 6.6 million units in Q3, with a relatively modest decline of 8%. Amazon secured third place, managing to grow shipments 18% to 3.2 million units, fueled by heavy discounting of its Fire tablets for Prime Day. Lenovo and Huawei took fourth and fifth place, with both Android vendors undergoing significant declines of 37% and 41% respectively.

“The reduced need for tablets in the post-pandemic world has been exacerbated by increased macroeconomic pressure on consumer spending,” said Canalys Analyst Himani Mukka. “With in-person education largely resumed and people spending less time indoors and on devices, expenditure on refreshing or upgrading tablets is plummeting as household budgets are pared back. But promotional activity by vendors and retailers, including back-to-school deals, along with rising deployments in the commercial sector, have helped keep shipment volumes at a higher level than before the pandemic. While the tablet market is unlikely to reach the highs it enjoyed in 2020 and 2021 again, the trajectory is more positive than was anticipated a few years ago, and vendors are signaling continued focus on the category. New players are entering the market, especially in the low-to-mid-range Android space in Asia, a region that will offer growth opportunities across end-user segments in the coming years. For example, the medical and automotive industries in India are verticals that are ramping up deployments of commercially purposed tablets. Meanwhile, industry heavyweight Apple now has a wide tablet portfolio covering different price points and use cases and is also bringing its strongest innovation, the M2 chipsets, to the iPad Pro.” 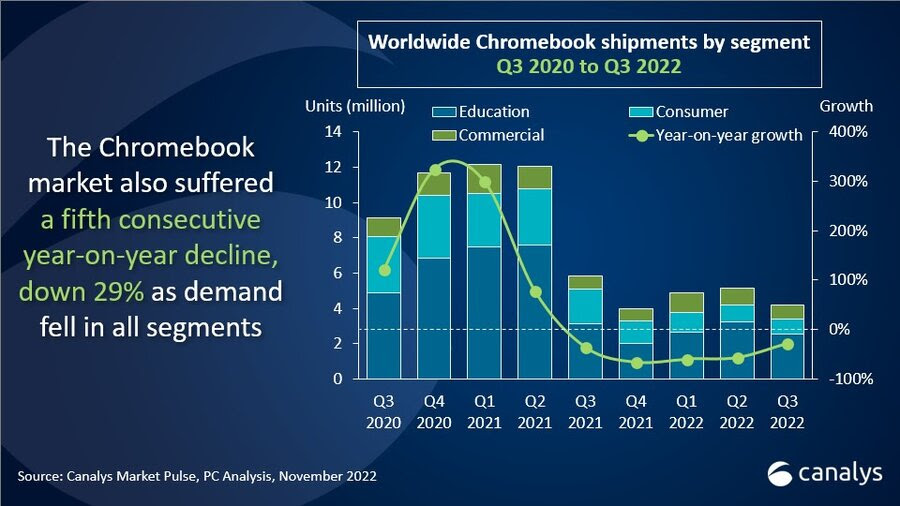 “Q3 brought further pressure to the Chromebook market as education demand saturation continued to take its toll,” said Canalys Research Analyst Brian Lynch. “Since the education market first showed signs of saturation in Q3 2021, vendors have struggled to find growth opportunities in other segments while managing high inventory levels. A fall in Chromebook demand was expected in the second half of 2021 but the extent of the decline has been worsened by economic headwinds, limiting education budgets and stemming any momentum among consumers and businesses. The current situation of high inventory levels and low demand has dented enthusiasm for Chromebooks for some vendors. Windows-based education PCs have attracted more interest as they will offer alternative sales opportunities in future instances of erratic education demand. Still, global education demand strongly favors Chromebooks as they account for the bulk of the installed base and are preferred by IT administrators across the US education system. Upcoming spikes in education demand will continue to benefit Chromebooks more than competing devices.”

Acer has found the most success in the post-saturation market, taking first place in Q3 with more than a million units shipped, posting 11% growth and capturing over a quarter of overall shipments. HP secured second place in the Chromebook rankings after suffering heavier declines than other vendors in recent quarters. It saw shipments fall 27% to 800,000 units in the latest quarter. Lenovo experienced the steepest decline of all the major vendors with a 50% drop as it struggled with high inventory levels and shifts its education portfolio to include more Windows devices. Dell, which had less focus on the Chromebook market throughout the pandemic, experienced a modest decline in shipments of 11%. Asus took fifth place in the market with a 9.6% market share.