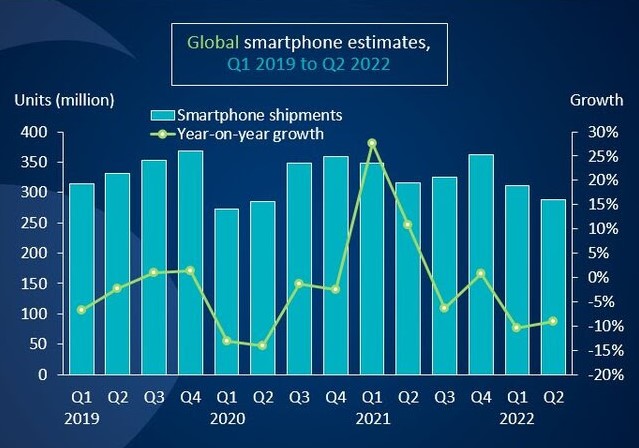 “The global smartphone market is suffering a second period of falling shipments after a brief recovery in 2021, and the sudden drop in demand is hitting the leading vendors,” said Research Analyst Runar Bjørhovde.
Samsung led the market with 61.8 million smartphones shipped and a 21% market share. Despite the weak seasonality, Apple held on to second place, shipping 49.5 million iPhones for a 17% market share. Xiaomi stayed in third place with 39.6 million units, while OPPO and vivo completed the top five with 27.3 and 25.4 million units, respectively.
Despite 6% annual growth, Samsung’s shipments fell 16% on the previous quarter as the vendor struggled with unhealthy inventory levels, especially in the mid-range. The company is pushing aggressive pricing strategies and heavy promotions for its low-end A series, leveraging the cost-effective ODM production to stimulate consumer demand in the mass market.
In the premium segment, the firm stressed its focus on foldable phones and the S series as profit drivers in developed markets. Meanwhile, solid demand for the iPhone 13 series in North America, China and Europe enabled Apple to grow despite the headwinds. The high end has proven relatively resilient during the recession, while promotions and financing options have helped with affordability.
“The major Chinese vendors managed to stabilize their worldwide performance compared with last quarter despite another round of double-digit year-on-year contractions,” said analyst Toby Zhu. “We have seen the top Chinese players focus on very different strategic priorities during the downturn”.
Xiaomi is ambitious to expand its high-end portfolio in China through its latest partnership with Leica, with new products hitting the market in Q3. It has also been adjusting product upgrade cycles to speed up launches in the mass market, leveraging its supply chain capabilities. OPPO managed a steady performance in Europe in Q2, with a year-on-year market share increase, thanks to its significant investment in sponsorships and, more recently, driving sustainability awareness, which has helped to raise its brand profile.