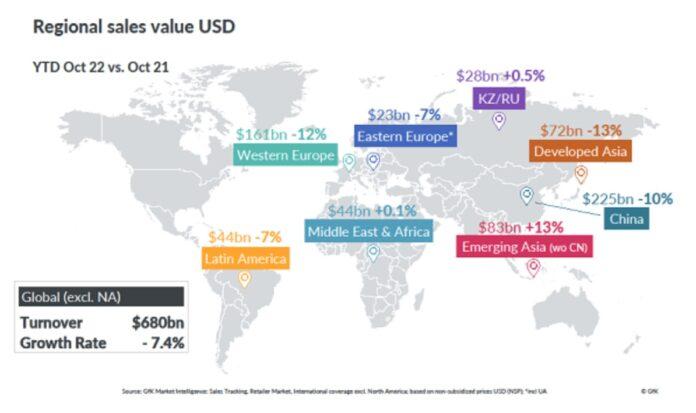 CES, one of the leading global tech trade shows, marks the start of the new year for the Consumer Technology and Durables (T&D) market. For GfK experts, it’s a time to assess the global T&D results and developments of the previous year and to give an outlook on what the new year will hold for the market. While the 2022 results look rather weak, the T&D market is expected to recover and stabilize in 2023.

“We have already predicted that the pandemic-related record sales of 2020 and 2021 would not be sustained and that the global T&D market would stabilize at a certain point. However, the turnaround in 2022 was stronger than originally expected, influenced by numerous macroeconomic factors, such as the war in Ukraine, high inflation rates and consumer confidence at record lows”, explains Ines Haaga, GfK expert for Consumer Technology and Durables. “Between January and October 2022, the global T&D market already faced a deceleration of more than 7 percent compared to the same period of the previous year, standing at a total value of 680 billion US dollars. This trend is unlikely to recover in the full-year results for 2022, but the forecasts for 2023 are more promising.”

Global vs. regional and local developments in 2022

In a regional comparison, the 2022 picture is thoroughly divergent at present. Looking at the turnover in US dollar terms, the positive lights are mostly coming from Emerging Asia (without China), which stands at plus 13 percent. There is also a small plus of 0.1 percent in the Middle East and Africa region. Nevertheless, these results cannot compensate for the negative development in other regions.

However, when we look at this in local currencies, the outlook is not quite so bleak. Comparing January to October 2022 with the same period last year, some European countries are developing less negatively in local currency than in US dollar terms – for example, Germany, which shows a small growth of plus 1 percent in euro terms. This is mainly due to the current strength of the US dollar compared to the euro. However, these unfavorable exchange rates will continue to drive up procurement prices, thus leading either to increased prices for end consumers, to reduced profit margins for retailers and manufacturers selling in Europe or even to both effects.

The large differences in sales growth between the regions are attributable to their performance in the last two years of the pandemic. While the T&D markets in Europe and Developed Asia reached record sales in 2021, they are now facing saturation effects. In contrast, emerging regions are experiencing catch-up effects in 2022. In addition to these benchmark factors, regional crises have taken a heavy toll on the markets overall, further reinforcing the already predicted stabilization of growth, especially in developed countries. While Europe is heavily affected by the war in Ukraine, China struggled with the impact of several lockdowns of factories and ports due to the zero-covid-strategy, which was effective until December 2022. The multitude of macroeconomic developments that have hit markets in just one year have contributed to a noticeable collapse in consumer confidence worldwide, with a significant decline of the global OECD confidence index from 99.4 in November 2021 to 96.6 in November 2022.

The effects of consumers’ polarization around price

When making purchasing decisions, T&D consumers generally can be divided into two categories: Those who need to buy in order to replace a broken product, and those who want to buy. According to gfknewron Consumer, consumer priorities really shifted in the third quarter of 2022 as the inflation crisis hit. More consumers moved from the second to the first group at this time, with a corresponding decline of 1.4 percent in the numbers giving “upgrading a working product” as the reason for making a purchase, compared to the first quarter. Additionally, consumers of all income categories are turning to cheaper alternatives within their preferred segment, whether that is in the entry- or premium-level. However, purchases made by low-income consumers are losing significant weight in the global market. This is because people in this group are reaching the limits of their budgets due to high inflation and are therefore holding back on making non-essential purchases in the T&D segment.

When we look at premiumization, which has been one of the main growth drivers in recent years, this is slowing down on a global level. While the decline of premium purchases in the APAC* region is still relatively stable at minus 2 percent from January to October 2022 compared to the same period last year, premium brands in the EMEA* region are suffering a sharp downturn of minus 11 percent. On a global level, this results in a decline of 5 percent for T&D premium brands overall.

“After a difficult year, expectations for 2023 are more positive. GfK forecasts a stabilization of the global revenue growth within the T&D market standing in the low single digits”, summarizes Ines Haaga.

The following trends and developments are expected to drive growth: